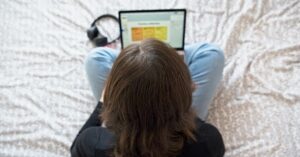 Only 20 percent of schools offered rigorous, technology-based remote instruction while school buildings were shut down this spring, according to a new report from the American Enterprise Institute, and students in K-12 districts with a majority of high-poverty or low-achieving students were less likely to receive rigorous instruction at a distance.

Nat Malkus, the institute’s deputy director of education policy, examined the websites of a nationally representative sample of 250 districts. He organized his findings on remote learning plans into three categories:

“Rigorous”: Delivered content through online platforms; offered some synchronous learning (via Zoom or another videoconference platform); tracked student attendance or otherwise expected student participation; and graded students’ work to some extent.
“Perfunctory”: Relied primarily on paper instructional packets; explicitly stated students were not required to participate; or didn’t offer information about remote learning on its website.
“Moderate”: Somewhere in between “rigorous” and “perfunctory.”
Overall, Malkus found one-fifth of schools fit the “rigorous” category, with 40 percent each for the other two categories.

High-poverty districts are defined in the report as districts with more than 60 percent of students eligible for free and reduced lunch programs. Malkus separated high- and low-achievement schools using data from the Stanford Education Data Archive’s Education Opportunity Project.

“We have some pretty large gaps here between the percentages of schools that are getting potentially substantially higher quality education supports,” Malkus said Monday during a Zoom briefing with reporters.

The study also broke down the findings to distinguish between districts with high and low percentages of minority student—but the numbers were fairly similar for both categories.

Prior research has shown evidence of a “poverty gap” in the form of significantly lower standardized-test scores for students who attend high-poverty schools, regardless of race. Surveys this spring conducted by the Education Week Research Center also found significantly higher rates of truancy among students and lower rates of access to technology and live instruction for teachers in districts with a high percentage of low-income students.

Today’s new report marks Malkus’ first effort to compare findings across districts from his research on how schools evolved this spring. It’s worth sounding a note of caution that the new study is preliminary; deeper data dives are expected later this year and for years to come, Malkus said.

Some education observers might take issue with Malkus’ decision to characterize remote learning on online platforms as inherently more rigorous than instructional packets. Millions of students nationwide lack at-home internet access, which means paper packets would be inherently more rigorous for them. Students with disabilities might struggle in some cases to access online instruction even if it’s available. In fact, several districts reported widespread technical glitches during early attempts to connect virtually with students.

Malkus argues paper packets can be a “weak facsimile of in-class learning,” particularly if they’re tied to weak policies for academic accountability. “Rigorous” instruction also encapsulates an expectation that students will demonstrate learning to their teachers.

Indeed, fewer schools with a majority of high-poverty students required one-on-one contact and participation, and fewer still tracked attendance, according to Malkus’ data.

School budgets are tightening nationwide, but the urgency to ensure equal learning opportunities for all students has only increased. Many districts are spending the summer on efforts to close achievement gaps, particularly around access to digital devices and broadband service. Slightly more than a quarter of respondents to the AASA survey said they only offer 1-to-1 computing programs to certain clusters of students in their districts, and 14 percent said “we do not offer any one-to-one device programs in our district.”

During a virtual panel discussion on the “digital divide” hosted by Common Sense Media on Tuesday, the Indianapolis district superintendent Aleesia Johnson said her schools, on average, had one device per three students prior to the pandemic, but she hopes the district will offer fully 1-to-1 computing environments this fall. The district has a high number of students of color and from low-income families, and more than 30 percent were struggling with internet access this spring, she said, so providing all students with devices is an important step.

“One to one would normally take much longer than what it’s going to take us to pull off right now,” Johnson said. “We are not going to go into the 2020-21 school year having to play this pick-and-choose game with our students.

South Africa is very well-known for its traditional music and cultural aesthetics. Music has always been one of the key aspects of people’s daily life, whether in the countryside or in the modern cities. The musical history of South Africa goes way back since the struggle against apartheid and since then it has become an integral part of the country’s cultural reforms.

Music has always referred as a source of healing mind and soul and a pave way for revolution. Music represents what a society is built upon and gives the essence of its culture and traditions. Further, it allows people from different places to experience and enjoy different cultures and emotions.

Over the years, South Africa has become very popular with its rich and vibrant music. There is a long list of musicians and performers that come from different part of South Africa and fans love to indulge in different genres of music produced and sung by them. There have been a lot of musicians that have become a part of the South African music industry, it includes Hugh Masekela, Miriam Makeba, Die Antwoord, etc. who have produced music of multiple genres. Samsonghiphop provides a long list of music differentiated into different albums. You also get an insight on the most popular South African musicians; it not only gives you the list of music and songs but also get information about the artists and the music they have produced over the years.

At Samsonghiphop, you get the list of different artist and their albums, which is categorized based on the year they were released. These songs are available with easy to download options and you can download them with a single click. The Mp3 songs can be downloaded and played both on iTunes and Android. You also get the option to download Fakaza album on the website. Other download options available on the website includes Audio, Mixtapes, Videos and even get latest news updates and happenings in the South African music industry.

An integral part of the South African music is the Fakaza songs that are sung by MthunziNamba andJabuHlongwane. The Fakaza album consists of 14 songs and you can easily listen and download the songs easily on Samsonghiphop.org. Apart from the Fakaza Album there is a variety of other South African music that you would love to hear.

Finding and downloading songs on Samsonghiphop is extremely easy and a vast range of music library makes it the most popular hub for listening music. We not only bring you one of the most reliable and trustworthy site to download and stream music, but we also help budding artists to promote their music. You can contact us, if you want to us to promote your music on our blog.